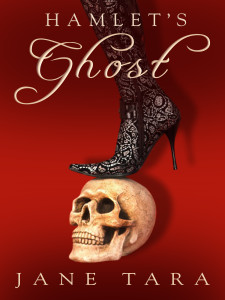 Rhiannon Dee, a gorgeous witch, moves to a country town to reopen a theater and finds herself torn between the man who owns it, and his father who haunts it.

Kip Daniels has been haunting the Hamlet Majestic for thirty dull years, ever since the stage roof collapsed on him during what was meant to be his piece de resistance: his performance of Hamlet. All he really wants is to get to the end of the play, but that won’t happen while the theater stands abandoned and boarded up. He’s resigned himself to an endless limbo … until Rhiannon Dee moves to town to bring the theater back to life.

Rhi has fled a failed life in New York. She can’t find work as an actress. She’s overshadowed by her mother who has a hit TV show about witchcraft. Rhi is sick of being seen as a witch and intends to turn her back on the craft. But she quickly discovers she can’t escape her gifts, especially when she needs to use them to help one very sexy but sad ghost cross over. Surrounded by new friends and supportive townsfolk, Rhi breathes new life into the Hamlet Majestic, and helps Kip accept his death.

Hamlet’s Ghost is a story about those moments in life that define us, and how to truly move forward we must find peace with the past.

Hamlet’s Ghost is the third book in the bestselling Shakespeare Sisters series. Buy it now.