We’re over halfway there in our major decluttering month.

January is not just about cleaning the house. It’s about shaking up the energy around us—starting the year by getting the universe to take notice. You can desire change… but unless you actively put it into action, nothing will happen.

By decluttering constantly this month, we’re shouting out, “I want change… I am changing.”

We are taking consistent steps towards forming a new and healthy habit—the ability to let go.

I’ve been decluttering for months now, but really gone in hard recently. This month I’ve been away from home so taken my decluttering to a new and often uncomfortable level.

I’ve cleared the things I’ve had stored at my mother’s house for years. There were:

Some things were easy to toss. I got my sons to look at my toys and choose one each for any future granddaughter I might have. They didn’t seem that enthused and said all the toys looked creepy.

SON 1: “They look like they’ll come to life tonight and stab us.”

ME: “They’ve been here for years.”

Later my two clowns were seen leaving on a friend’s car. 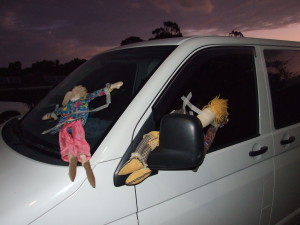 So the toys were easy to throw. The majority was a little uncomfortable… I knew I had to let go but still… it was bittersweet.

Letting go of some things was really tough. But let go I did, because unless we let go of our baggage, how will we Travel Light? And it’s when we travel light that we feel, experience and receive all that life has to offer.

Did I let go of everything? No. I couldn’t part with Raggedy Ann, or my half-written romance stories from when I was young. Or the romance story I wrote for school with the note from the teacher: “Interesting ideas but you should lay off the melodrama.”

There’s one last thing I need to toss. I’ll share that with you later and get your advice.