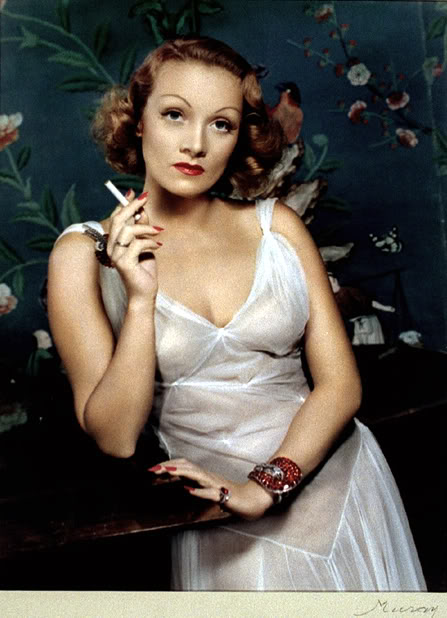 The Japanese search for a resemblance to someone, anyone famous. It makes them feel like they know you. So anyone famous with whom you share a similarity, however vague, suddenly becomes your identical twin. For example, Marlene had long blonde hair, I have long blonde hair, there, we have a connection. Marlene and I are twins. As for Jodie Foster, I’m still not quite certain… she once played a women who had an unusual relationship with a cannibal and I am a vegetarian. Slight connection; YES, we have a match.

Sitting around with a bunch of inebriated Japanese as they desperately try to work out who you resemble can be great fun. If they are really stumped you can help them out with a subtle, “Well I have been told I look like Marlene Deitrich.” But usually it is best to sit back and wait. You may discover that you look like a new, completely different star. One who’s beauty is so renowned that you will ride high on the flattery for weeks… or at least another jug of Asahi. But like any game of Russian Roulette, this technique can backfire, leaving you scarred for life.

My friend Lynne and I were out one night with a bunch of rather delectable college boys whom we had met on the train, about an hour before hand. We were in an izakaya, guzzling back booze and flirting like crazy.

“What? I slurred in mock horror. “I look like a taxi driver? Thanks a lot.”

I looked suitably flattered… at least I felt I did. In reality I probably looked like a drooling drunken mess but this is my memory, not an objective version of events.

“Now me, now me, who do I look like?” squealed Lynne almost climbing on top of the table in anticipation. She flicked back her hair and tilted one shoulder forward as I had seen her do countless times before. It was her on heat look. Her lips and teeth were stained dark red from the wine she was drinking. A compact package of blonde hair, brown eyes and tanned skin, Lynne was still being asked for ID at clubs eons after she farewelled her twenties.

The Rather-Delectable-College-Boys moved in towards each other, their faces bowed in serious discussion. They nodded and murmured, obviously all in agreement.

“I’ve been told I look like Holly Hunter,” yelled Lynne. For someone so small, the girl packed an auditory punch. Loud doesn’t cover it. Every movement was under an acoustic magnifying glass. At night I could hear her coming home from work… when she was three blocks away. I would listen to the stomping clamour of her obligatory platform shoes making their way down the neighbourhood’s side streets. Finally she would stomp, stomp, stomp up the stairs of our little wooden house in a manner that registered a 6.3 on the Richter scale.

“And I think I have Sharon Stone’s nose,” she screeched. You had to give the girl 10 points for healthy self-esteem.

An air of excitement enveloped the Rather-Delectable-College-Boys. It was obvious that they had made a decision, one that they all agreed on. They turned to Lynne who was licking her wine-stained lips like an over-excited vampire. TOTRDCB cleared his throat. He was the obvious choice to deliver the final decree.

Lynne nodded and fluttered her heavily glazed eyes. She knew it.

Almost five years have passed but Lynne still brings this up when she’s drunk.

Every geijin I know has at some stage or another, and quite often on a regular basis, been told that they look like someone famous. Most of my western male friends resemble Arnold Schwarznegger, which is strange seeing as, in my highly sought after opinion, the majority wouldn’t even pass for him in the dark, whilst sitting in a box singing Edelweiss. I dated a guy who was constantly told he was Johnny Depp’s twin… but if that was true we’d still be together. So obviously while being told you look like someone hugely famous, beautiful and successful is nice, if the bearer of this news is Japanese then it’s best to ignore it. A point that was driven home beautifully to me one day at the movies. A friend and I had been to see Braveheart and were sitting watching the credits roll as two women in their twenties stood up in front of us to leave.

“Did you understand what that was about?” asked the first.

The second girl shook her head in frustration. “No. All foreigners look alike to me.”