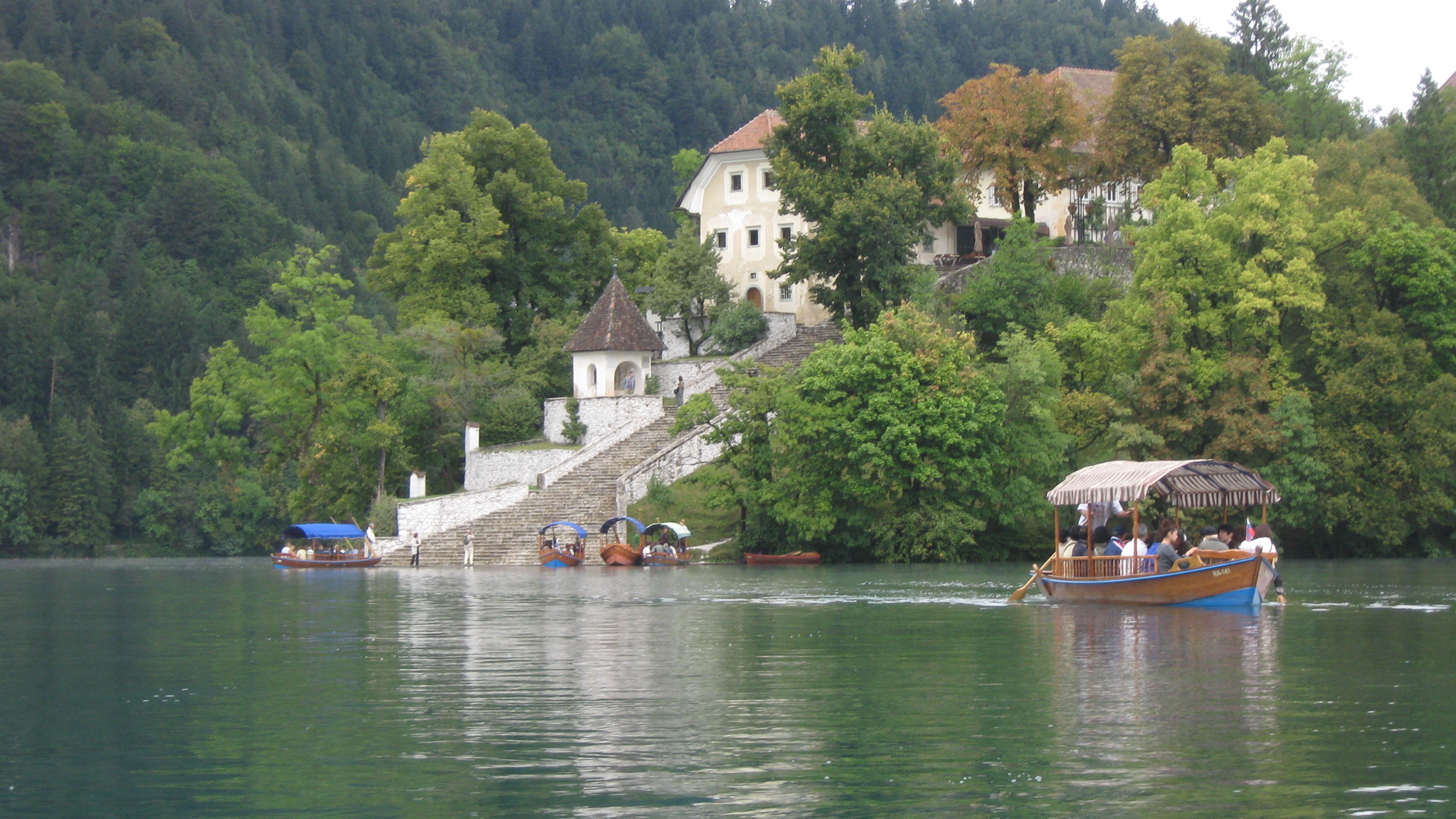 Bled is Slovenia’s most popular tourist resort, located about an hour from Ljubljana, the country’s capital. Pilgrims have been visiting the healing waters of the emerald lake for centuries, but it wasn’t until 1855 when a Swiss doctor named Arnold Rikli opened the first “wellness and relaxation” retreat that the town became a favorite holiday spot for wealthy Europeans. Nowadays, the actual town is overrun with tourists in the summer months, but even the cheesy casino and overpriced gelato bars can’t detract from the fairytale scenery. Most of the hotels are clustered together in the town at one end of the lake, but don’t let that deter you. There are a number of more secluded hotels, away from the crowds.

We opted for Hotel Triglav, which was completely renovated and reopened in May this year. From Triglav’s more isolated location—it’s an easy twenty-minute walk from town—we were able to explore the lake in peace. And Lake Bled is peaceful. Motorized boats are not allowed on the lake so only the sound of oars hitting the water break the silence. Wooden boats, known as pletna, have been ferrying people back and forth to the island since the 12th-century. The town has a one boat per family policy with the honor of rowing the boat passed from father to son.

We bypassed the pletna and instead rented a hand carved rowboat, which gave us the luxury of floating aimlessly around the lake for a while. Fish occasionally leapt out of the water. Now and then a pletna would glide by. The sun shone down and sprinkled diamonds across the lake. I leant back and took in the view… The Church of the Assumption perched on the tear shaped islet, the aquamarine lake surrounded by forest, Bled’s medieval castle hanging precariously to a cliff above us, the Alps surrounding it all… Absolute magic!

Bled’s tiny island, the only island in Slovenia, is steeped in magic. Archaeological digs have found traces of civilization dating back to the Stone Age. For centuries it was a Pagan ceremonial ground honoring the fertility goddess Ziva. One legend says the lake was originally a meadow until the fairies called up the forces of nature and flooded the whole region, leaving only the hill where they danced jutting out of the water. Drifting across the lake towards it, it’s easy to believe that the island is still home to all sorts of mythical creatures.

We tied the boat to the small jetty and stared up the long staircase to the church above. The locals say that any man that can carry his bride up all the stairs without dropping her is ensuring a healthy, happy and long partnership. Every Saturday brides from all over the world are carried up those steps. It speaks volumes about the sheer romance of the place that my partner, whose most romantic gesture prior to that trip had been to fix my external hard drive, hoicked me over his shoulder and carried me up the ninety-nine stairs.

Inside the baroque Church of the Assumption, with its 14th-century frescos and ornate gold alter, is a wishing bell. The bell has rung out the dreams and desires of visitors to the island since 1534. My partner gave the rope a tug, no doubt wishing for a chiropractor after lugging me up the stairs. My turn, and I rang the bell over and over wishing for the same thing; that the beauty of Bled remains untouched so that one day my sons can lug someone they love up the island’s stairs and experience the magic for themselves.

Hotel Triglav offers two night packages that include most meals for 119 euro per person.

Around the Lake: A leisurely walk around it takes less than two hours.

On the lake: Rent a boat at camp Zaka from local boat maker, Janez Polak. (5 euro) or catch a pletna (10 euro) across to Bled Island and the Church of the Assumption.

Above the lake: 100-metres above the lake is the imposing Bled Castle. Admission is 5 euro.

The travel brochures will tell you that there are two train stations, with Lesce-Bled being the most convenient. That may be so, but Bled Jezero station is on the more picturesque end of the lake and also contains a small pub that sells incredibly cheap Slovenian beer. Sit out on the terrace and enjoy a Lasko and a view to die for.