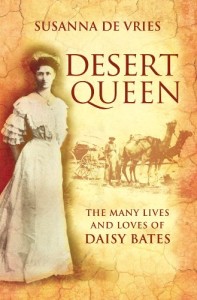 Daisy Bates in not an easy biography subject. The woman built a web of lies around herself when she was younger, and later in life burned all her personal papers. Susanna de Vries has done a solid job researching, unraveling and telling the story of this fascinating woman. Desert Queen isn’t a great biography, but it’s highly readable and you can’t really go wrong with the subject matter.

Daisy Bates emigrated from Ireland to Australia in 1883. Aware that her prospects were dim, she lied about her family and background, in the hope of securing herself a favorable marriage. Instead, she briefly married Breaker Morant, followed by two bigamous marriages, and had her only child, Arnold. She became a journalist, and later an anthropologist, albeit an unrecognized one in academic circles.

It was her work with Australia’s indigenous people that set her apart from other women of her time. She lived in a tent in harsh conditions and spent years writing down their stories. She recorded hunting territories and boundaries, and these records are used today in land rights claims. She nursed and fed sick aboriginal people, using her time with them to gather information about their cultural practices and languages. Her work remains controversial. She self-funded all her work, often writing pieces about aboriginal cannibalism, knowing it would sell, but which ultimately harmed her anthropological reputation.

De Vries does a solid job at capturing both the fascinating and frustrating aspects of this complex character, but I had some problems with the book. I didn’t like how she regularly assumed to know how Daisy felt, despite there being no record of that moment. Also, she puts forward a couple of pretty outrageous theories as if they are fact. And the final part of the book, which tells of Daisy’s spiral into dementia might as well be fiction. Daisy was never diagnosed with dementia.

This aside, it’s an interesting tale about a fascinating woman. I do love my female traveller tales, and Daisy’s story is a good one, and Desert Queen a decent telling of it.