Did you see us in The Australian last weekend? Here’s the link.

I’m so much happier since I embraced this life of experiences over things, and I’m passionate about sharing that with other families. This piece in The Australian is the first of a articles about me over the next month. I’ll keep sharing as they come out.

Dinner is a big event in our home. Not because of the meal itself—I hate cooking and am the first to admit that what I serve up often doesn’t actually have a name. In fact, I’m thinking I might publish the Dunno Cookbook. Recipes like Dunno Pasta, Dunno Curry, Dunno Pie… so named because I dunno what’s in them…

So the food itself isn’t important to me. It’s healthy. They eat it. Case closed.

The reason dinner is a big event is because we all sit together every night and talk.

With four sons that talk often turns to penises, bodily functions and FIFA15. So I guide the conversation. Every night I ask the same two questions, and then we go around the table while they answer.

They all roll their eyes… but they join in, probably out of habit more than any genuine enthusiasm. But that’s the key isn’t it? Habit. Do something for long enough… it becomes a habit, and we rarely question our habits.

Make those habits positive and beneficial, and there’s no need to question them.

I started this dinner question time years ago. We’re a blended family, and this dinner routine created cohesiveness. Also, we were in a situation where my partner’s children were arriving with new things every week. Expensive gifts. Huge Lego sets, toys, electronic devices. I’d always taught my own children that things had no meaning… that experiences were more valuable. We had two sets of kids under one roof, both being taught very different lessons. How did we deal with that?

Both sets of kids had to learn to be grateful for what they had. And for very different reasons.

I started the dinner conversations about gratitude and week after week, after month, after year some interesting changes have taken place.

Firstly, my own kids very quickly stopped questioning the things the other boys brought home. They valued the experiences that they had. They were grateful that they had other opportunities and family dynamics that their stepbrothers didn’t have.

Next, my stepsons began to say thank you, and appreciate things in a way they hadn’t before. They stopped expecting, and started thanking. They started acknowledging small things as well as the big things. 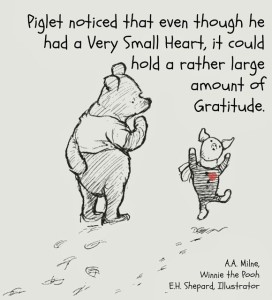 Then leading up to my younger son’s 9th birthday, we had this conversation:

HIM: “Mummy, for my birthday… I don’t want a “thing”… I have enough things…Can I have an experience instead?”

ME: “Sure honey, that’s an awesome idea.”

HIM: “Just not parachuting. I don’t want to skydive…”

(You can read what I got him here.)

(And another blog about experiences not things here.)

The following year, all four boys asked for experiences rather than things.

My stepsons went from being completely confused by the concept of gratitude (during our first dinner conversation) to being thoughtful in their responses. They stopped asking for things all the time…

If I ever missed asking the questions at the dinner table, the youngest of the four boys reminded me.

Gratitude does get in!

Last Christmas our four sons woke to nothing… well no things. They had a box that they opened together… and in that box were details about an experience we will have as a family. In June we’re going to Angkor Watt in Cambodia. We’re doing it rough… and the boys were told they are expected to pitch in and work towards it. Six months is a long time for a child to wait for a Christmas present… but all four boys were so excited by the promise of this experience that they didn’t think twice about not opening the latest toy from China.

Consistently asking them to focus on gratitude has shaped them all. It has shaped us as a family, and defined what is important to us in our home. It has brought us stability as a unit, and that is especially important for blended families.

Daily gratitude is a very simple and effective tool for any family.

What are you having for dinner tonight?